LSU announced Wednesday that it is banning the fraternity Phi Delta Theta from its campus until 2032 for violating university hazing policies. Just a few hours earlier, a House committee voted to increase the penalties for hazing in the state of Louisiana.

Right now, hazing is considered a misdemeanor in the state, punishable by a fine of up to $100 and 30 days in jail. Representative Nancy Landry’s (R-Lafayette) bill would make hazing a felony when it results in serious bodily injury or death. Those convicted could face five years in prison and an increased fine up to $10,000. 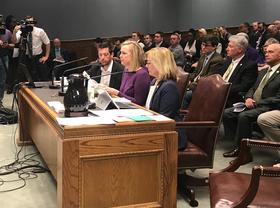 The bill is named in honor of Maxwell Gruver, an LSU student who died as a result of hazing in September.

“By strengthening the hazing law to a felony with larger fines and jail time," she explained, "it will deter these young people from participating in hazing rituals. There should be zero tolerance.”

The bill also spreads accountability to the university if they knew hazing was occurring, but fail to alert law enforcement.

The bill is headed to the House floor.