Nietzsche And His Superman Receive An Orchestral Renovation

Richard Strauss created sounds for the orchestra never heard before. In his splashy, dramatic, and emotionally charged tone poems, he makes the orchestra shine and gleam in ways no one else can. In today's broadcast, we hear two of his most iconic tone poems— one inspired by a mythical (or is he?) German prankster from the Middle Ages, and the other inspired by the classic, history-changing tome of Friedrich Nietzsche — Thus Spake Zarathustra. As usual, host Daniel Lelchuk sheds light on the music at hand as it emerges as fresh and vital as the day it was written. 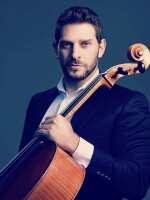 Daniel Lelchuk
Described by The Washington Post as a “dazzling virtuoso,” Daniel Lelchuk was appointed Assistant Principal cellist of the Louisiana Philharmonic Orchestra in 2013 by music director Carlos Miguel Prieto; he holds the same position with the New Orleans Opera Association. He has performed at numerous international festivals including those of Aspen, Baden-Baden, Hawaii, Colorado, Lakes Area, Silicon Valley, and Salzburg. He serves as cellist for New Orleans based chamber ensemble Lyrica Baroque. At the invitation of Prince Nicolò Boncompagni Ludovisi, he presented a series of solo cello recitals at the famed Villa Aurora, Rome. A founding member of the Castleton Chamber Players with violinist Eric Silberger, Daniel Lelchuk served from 2010-2014 as principal cellist of the Castleton Festival under Maestro Lorin Maazel.
See stories by Daniel Lelchuk