Out To Lunch: Dine Out Work Out

When you launch a new business, you have no way of knowing whether you're going to make a billion dollars, or make a bunch of decisions that add up to little more than a valuable lesson.

When a small group of New Orleans guys started hosting pop-up foodie dinners in deserted buildings, few could have predicted Dinner Lab would turn out to be a multi-million dollar nationwide business.

Dinner Lab Co-founder Paco Robert joins Peter on this edition of Out to Lunch today, along with Jason Navarro.

Jason's business is at the other end of the dietary spectrum — he's created a new line of sports supplements, called 4D.

Taking on every product in GNC, and setting up dinners in bombed out buildings across America could be the subjects of two reality TV shows. Peter tackles both of those topics today on Out to Lunch. And that's not all, he's also taking on dressing up like a fairy princess.

In the You Heard It Here First segment of the show, Emily Chatelain introduces her party-girl biz, Bibiddy Bobiddy Bash.

Tags
Out To Lunch businessinterviews 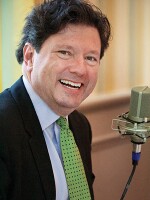